A few weeks ago I facilitated our big end-of-Alpha retro for our Data Discovery project and I thought I’d share the approach I took.

Big end-of-phase retros can seem a bit daunting: they take longer (3 hours in this case) and some team members can feel all retro’d out by the time these come around. To help counter that, I wanted this retro to focus on the positives and to celebrate the amazing work that has taken place over the last 5 months or so.

To set the tone we had Andy, our Service Manager, say a few words on his experience and observations of the Alpha journey. I then tapped into the now-famous, GDS “It’s OK to…” to make sure that we were all starting the retro from a good place. 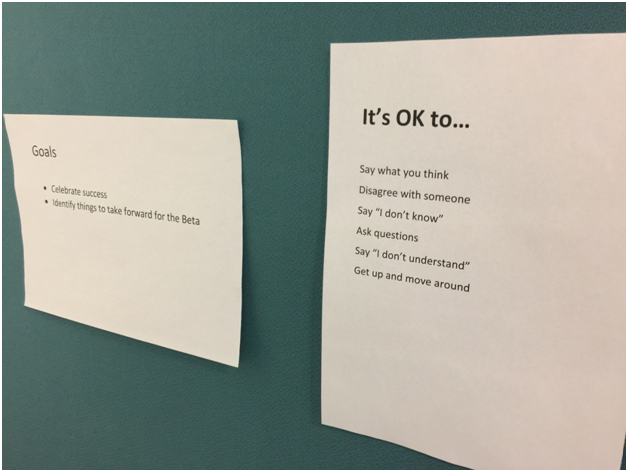 I split the retro into two halves, with each half covering one of the two retro goals:

Having plied everyone with a heap of crisps and sweets, we launched into our first activity. I asked the team to reflect on the Alpha, and to consider what they were proud of and what we did well. After 10 minutes of frantic post-it writing, I asked each member of the team to share one item each, which we then collectively discussed. It’s worth pausing here to look at some of those positive outcomes:

The next step, blatantly nicked from my former colleague, Matt Jukes, was to ask the team to map their items to a timeline of the Alpha.

This generated further conversation and a few more items were captured and added to the timeline as we went.

The final step was to ask the team how they felt, month by month, during the Alpha. They had the option to colour in a circle for each month in red, amber or green to reflect their morale at that time. This showed that, like many projects, the team began by feeling upbeat before encountering challenges as they moved deeper into the project. By the end of the project, the team’s morale was fairly high, although not quite 100% “green”. The second part of the retro explored the reasons for this in a little more detail.

To keep the energy levels up for part two of the retro, we took a break and came back to a short energiser. A fellow delivery manager had captured some humorous comments from various team members over the course of the Alpha – so we had a quick game of “guess who said it”. One of my favourite quotes was “it’s not a bug, it’s an un-built feature.”

Identify things to take forward for the Beta

So, with everyone refreshed we moved on to part two of the retro. For this section I used the metaphor of a journey and the concept of backpacking. Again, I asked the team to reflect on what we’d done during Alpha; we discussed the things we’d want to take forward on our Beta journey (or pack in our backpack) and the things we’d want to leave behind (in a draw). It will come as no surprise that many of the things the team wanted to take forward were also items that came up in the first activity:

The items to be left behind offered a slightly more interesting insight, as some of those items also appeared on the “take forward’ list: 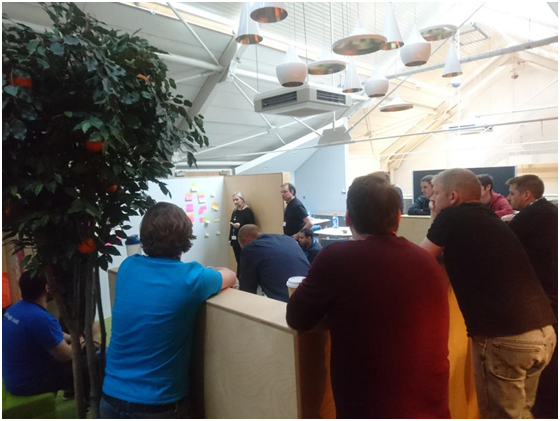 For the final task, I asked the team to dot-vote on their most essential items to tackle for Beta. To continue the metaphor, the stuff they had to have in their “pocket”.  The 5 essentials were:

A week or so after the retro, I did a small survey to get some deeper insight into some of these “essential” items. The outputs from this, and the retro itself, are now being used to give context to our Beta planning.