Looking back it would be fair to admit that regional and local content has been a bit of a problem area for the ONS digital team. The main ONS website, that the alpha prototype is looking to provide an alternative vision for, only has a limited amount of sub-national data with most of the lower level data we produce available from other websites such as Neighbourhood statistics and nomis or the beta census data explorer.

Our previous research had highlighted that users, particularly for our forager persona, have real trouble finding what they need and don’t have an understanding of what is available where or, in a lot of cases, that these other sites exist. We know the main journeys for their tasks start by selecting a region and then drilling down to statistics for that area, or getting to the statistics they need and then drilling down into lower regions, but not how the ‘drilling down’ part of this would work best for them. In addition to this the option of incorporating all these statistics into the main site was not possible so we had to look at alternatives to make the user journey clearer and better highlight what was available.

We decided to use what we knew to build a prototype alongside the alpha that we could take out to test and that would help us identify how users want this journey to work longer term. A big part of this work was around identifying what was available and how we could use it going forward so a lot of work went into researching. We worked again with Martin Coulthurst (who I worked with on the Key Economic Time Series page) with the aim of providing an overview for a requested geographic area and allow users to get to other data for this area and continue their journey from there.

Before we go any further, why not take a look – http://onsdigital.github.io/Alpha/regional 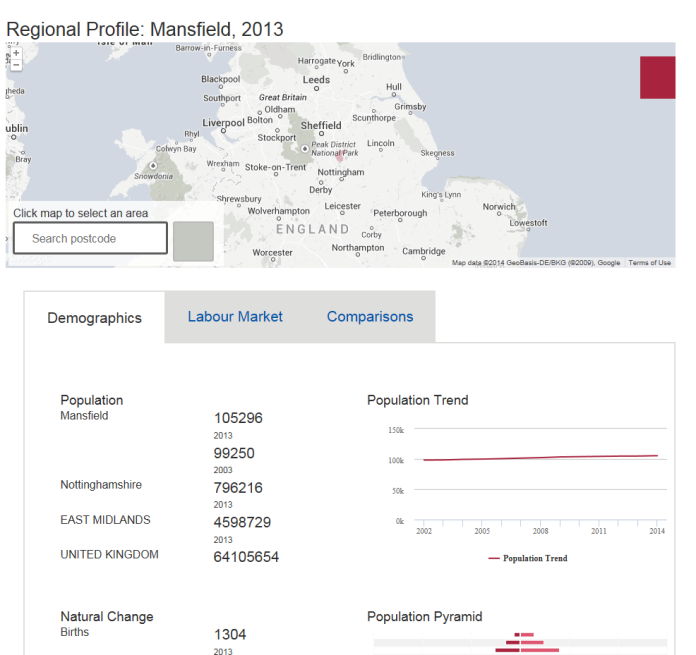 User testing and a realisation

As we developed and investigated what was available it became clear that the prototype would not function in the way we had initially intended. Whilst it met some user needs it would not solve the main issue and because of that would likely add to the confusion of the multiple sites. This was confirmed when we were able to demo the working prototype to a number of users during our week of user testing halfway through the alpha. This testing showed us that as much as we knew local content was important to users, it was even bigger than we had imagined and a very key part of many users tasks.

Where to go from here?

Whilst not solving the primary aim, most of the users felt that it would be useful for them in a slightly different way than we had originally intended, as a tool to provide a quick overview of key statistics for an area, or to compare. Given that the majority of the development had been completed and there still seemed to be a user need we decided that we would not look to integrate into the alpha prototype itself but focus the remaining time on this requirement of a regional overview, and take this out to test with users separately.

For the alpha itself we focussed much more heavily on signposting users to local content throught the journey at any points likely to be natural jumping off points, particularly on the individual time series pages.

What do you think?

It would be great to hear what you think of this or any other ideas on how we can help users get the data they need. Email any comments or suggestions to web.comments@ons.gsi.gov.uk