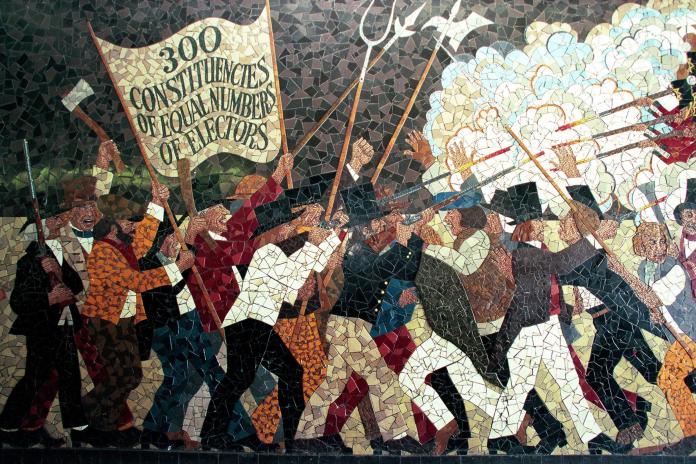 “The Newport Rising was the last large-scale armed rebellion against authority in Great Britain when, on 4 November 1839, somewhere between 1,000 and 5,000 Chartist sympathisers, led by John Frost, marched on the town of Newport, Monmouthshire.” Wikipedia

Now clearly the above quote has nothing to do with the development of our Beta but it is a hugely important part of local history where we are building this application and we have recently integrated our first take of our chart builder into Florence (our publishing platform) and I have christened it ‘Chartist’ in honour of that movement.

We looked at a lot of similar systems already out there on Github like Datawrapper, Charted from Medium, Chartbuilder from Quartz as well more fully formed apps like the Daily Graphics Rig from NPR and read with envy about Mr Chartmaker from Gregor Aisch at the NY Times. In the end we stuck to our tried and tested method of starting with the minimal viable library to support our needs and keep it as simple as possible.

Initially we only want to offer a handful of simple charts that follow the best practice guidance supplied by our colleagues in the Data Visualisation team and while they are interactive and responsive we have tried to keep things as minimal as possible. The feedback from our Publishing team who have tested the functionality out has been really positive with people commenting on how easy to use it is and at the quality of the outputs.

This has always been one of the really significant features for me. The main mantra for this project has always been ‘data intense, design simple’ and being able to support quality charting has always been integral to this goal. The work the team has been doing over on Visual.ONS has set a standard for ONS chart design from now on and we need to live up to that.

The flip side of providing charts is we need a way to better support reference tables in HTML as well. Our requirements for tables are pretty specific and stray from our usual desire to keep things as simple as possible – sometimes we just need to find a simple way to be able to present something a little complex.

This has proved a slightly knotty problem but we think we have found a nice solution that fits nicely in to existing skills and workflows of our staff. The plan is to allow staff to build the tables in Excel (the weapon of choice for the majority of ONS people) according to the guidance that our Data Visualisation colleagues have again supplied, upload the XLS into Florence in the editor and then use a relatively lightweight Java library to transform it in to HTML which will be injected into the Markdown inline. This is still at the prototype stage but we are feeling good about it. Now making those tables responsive? That is for another day.

There is a lot more going on; getting security certification sorted out, moving to longer term cloud hosting with Eduserv, being guinea pigs for a new internal assurance process based on the GDS Service Assessments not to mention the building of the actual website (lots of talk of SASS and Handlebars at the moment) but we’ll get into the detail of some of that in a future instalment of Sprintnotes 🙂

Explaining what you don’t do?
Publishing with style